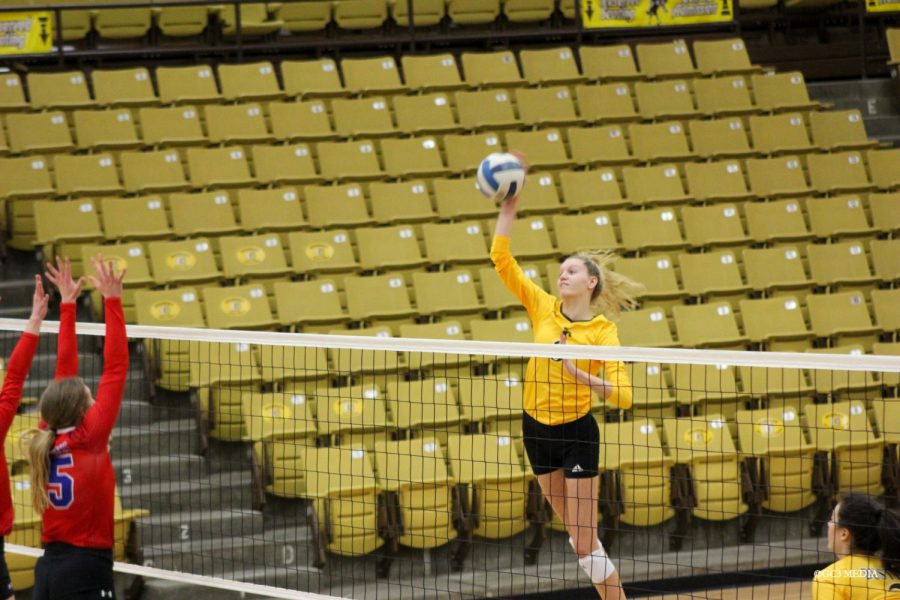 Reagan Karlin spikes the ball over the net to get a kill.

The Garden City Lady Broncbuster Volleyball team opened their season home opener with a 3-1 win over conference opponent Hutchinson Community College Monday night. In the first set, Garden City sailed away with a 25-14 win. Hutchinson lead going into the second set as the Broncbusters climbed their way back into a 25-23 victory. Laren Baldowsky, a  5’11 Freshmen from Burlington Wisconsin, had a game winning block to settle the second match sending the home bench into a chaotic celebration. Hutchinson would then jump out to get a win in the third set. “I messed up the lineup” said Coach Hiltz when asked about the third set. Coach Hiltz only in his 2nd year at Garden City said he was extremely proud of how the girls played tonight. “From Reagan and Tajua at the net to our middle blockers.” Garden City would later win the fourth set, breaking a 38-match losing streak to the Hutchinson Blue Dragons. The Lady Busters are now 3-0 in the season as they set their sights on No. 5 Odessa College. “We’re ready to compete” said Laren Baldowsky. Coach Hiltz later added on the the comment. “In order to be recognized nationally you have to play nationally known teams.”