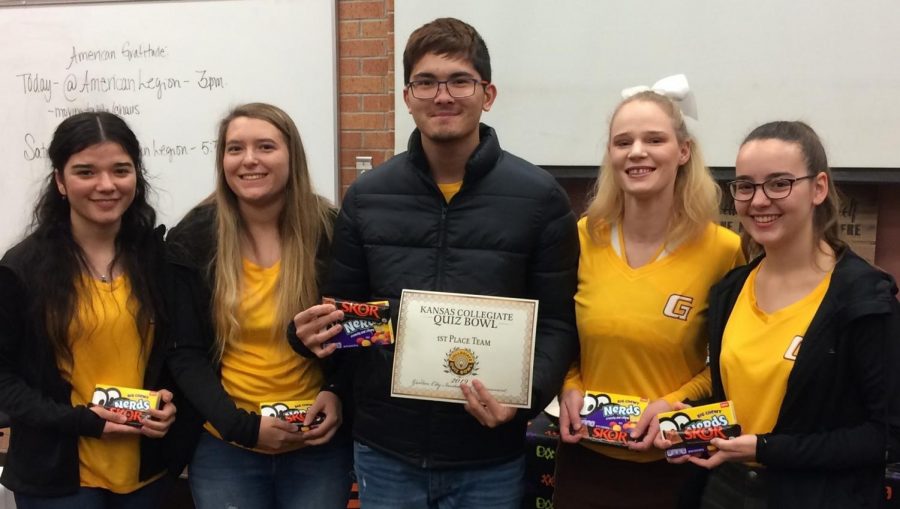 “Typically, what happens is when somebody is a new player, they’re pretty quiet that first semester. And it doesn’t mean that they don’t know things, but they are building their knowledge and they’re also building speed; because sometimes they’ll know something, but it takes them a few seconds longer to be ready to buzz and the more experienced players tend to be faster. So, whenever you have a team with more experienced players, you know, you’ve got more folks ready to buzz in, and when you’ve got newer players they tend to be a little shy in that first semester. So, they’re building confidence, and that’s usual. We know that that is how it works and we expect that to happen.”

Said Dr. Ferguson. Despite this higher ratio of “new blood” this year, the GCCC Quiz Bowl team is on a great start to their season, having won the opening tournament on Nov. 2. Standing at first place in the overall scoring and having Madison Wilson take the award for most individual score, this year’s Quiz Bowl team has definitely shown that they are a force to be messed with.

While the team only has one meet left for the semester, the Snow Bowl at Cowley Community College, they are staying on top of their game to prepare for the upcoming tournament. The Snow Bowl will surely be a greater challenge for the team since it includes colleges from both the West and East regions, making it a much larger meet. While the teams will have the challenge of competing in Regionals and State during their season, they also hope to prove their capabilities to the national organization so then they can be invited to the national tournament hosted in Chicago this year. This tournament would take place in between Regionals and State, but will only happen if the team receives an invitation.

“It’s always fun. Regardless of how we do, I really want them to come away from this team having had an experience they enjoyed. I want them to look back on this in 20 years and be like ‘that was so much fun being on that team’. They get to learn stuff, they get to travel a little bit, they’re making friendships, they get to be around, you know, a bunch of really bright people, and spend time together. And of course we want to win, of course.You know, it’s a competitive team, but my big thing is I want them to be proud of themselves and the growth that they experienced.” With the season finally underway, the GCCC Quiz Bowl team can finally show of what they know and what they got.